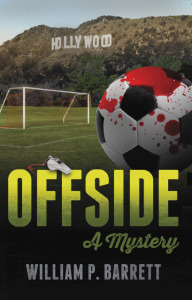 Now that OFFSIDE: A Mystery is out, my book blog is up and running.

It is my intention to use this space in several ways. They include (1) engaging folks who have a view about the book and (2) commenting on themes and topics therein.

Concerning the former, visitors to this site can post comments below a blog post or send feedback via the Contact link at the top of the page.

Concerning the latter, even though the plot of OFFSIDE is fiction, there should be no shortage of material for this blog. The novel centers around the murder of an adult referee of youth soccer in a ritzy Los Angeles suburb at the peak of the real estate bubble in 2006. But there is a fair amount of social commentary about all kinds of topics.

I hope you’ll spend some time with the book. Trust me, it won’t be boring.