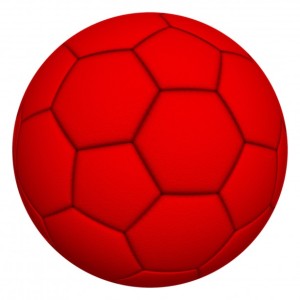 Once, when refereeing youth soccer in Southern California, I encountered a coach who was being eaten alive by–the soccer ball color. Yes!

The ball had been provided by the home team, as is traditional, and met all the requirements of the Laws of the Game as to shape (“spherical”), size, composition, weight and firmness. But the Laws don’t specify color, and here it matched the hue of the home team’s jerseys, a bright red.

This was a bit of gamesmanship on the part of the home team, and it certainly was working, at least so far as the away coach was concerned. He and his team were clad in green. Before the match he bitched mightily about the ball color. Waving him off, I blew my whistle for the kick-off. I could see him stalking the touchline like a caged tiger hoping to strike.

The first time the ball crossed the touchline on his side of the field to be out-of-bounds, there was the usual scramble to get it back into play. The throw-in was taken by a player–with a white ball.

The away coach clearly was behind this. I stopped the match, demanded that the red ball be produced, and warned the coach that his action violated Law 2, which states, “The ball may not be changed during the match without the authority of the referee.” The coach simply shrugged. I ordered a re-do throw-in.

Near the end of the first half, it happened again. I again caught it and again demanded the red ball. Now I was really irked and thought about tossing the coach, using the authority granted me under Law 5 (The Referee), which states the official “takes action against team officials who fail to conduct themselves in a responsible manner and may, at his discretion, expel them from the field of play and its immediate surrounds.” But really, a coach expulsion for a violation of Law 2 (The Ball)? The away coach smirked, knowing I wouldn’t give him the hook for something so trivial.

Now, I just published my debut novel, OFFSIDE: A Mystery, about a far-louder coach in Southern California. But what really brought this long-ago incident to mind was an article by William Lai last week in Hong Kong’s South China Morning Post, which has to be one of the few newspapers in the world with a soccer referee as a columnist. The headline: “Bickering over colour just trivial: In Hong Kong’s lower divisions, teams can become childish and petty when choosing the hue of a ball to use on match day.”

Although the article didn’t explicitly state this, I imagine that Lai, whose column is entitled The Rational Ref, was recounting personal experience when he wrote:

In the lower divisions and other competitions, there is no official match ball and this can lead to bickering and one-upmanship. Balls presented to referees are usually different colours, disparate brands and in varying conditions of decay. So how does a referee choose? By following the rules, which state that so long as the ball is spherical and within the parameters set for the size, weight and pressure, it is playable. There is nothing that states one ball is better than another based on colour, brand or material.

The bickering starts when players turn up their noses at their competitor’s ball and attempt to out-psyche their opponents. “It’s bright pink; it’s too bouncy; there’s not enough air; it doesn’t feel right; call that a ball?” are the tried and tested methods.

Soccer isn’t called the world’s sport for nothing. And that includes coaches seeing red.